Kathmandu valley is an ancient city of Nepal surrounded by Himalayan range. It has many prehistoric sites and monuments, which is still preserved by the Nepal government.

Kathmandu having the favorable weather conditions, had many tribes and communities flourished since its origin. With the cultural diversity, it also has a wide range of cultural heritages. Some of them are listed as UNESCO Heritage sites as well.

The number of old palaces and ancient buildings are well preserved in the Kathmandu Valley. Three very famous Durbar Squares of Kathmandu, Bhaktapur and Patan are also listed as the World heritage sites. The intricate details of the art works engraved in the temples found in these sites are beyond one’s imagination.

Even the architecture of the temples and buildings in these sites is very unique. Many artisans from the medieval age travelled to surrounding countries with their ancient knowledge of art and architecture. The influence can be see in the neighbouring countries in the pagoda style temples and monuments.

Kathmandu Valley has a population of around 2 million and is home to people from diverse culture and ethnic backgrounds.

It is a vibrant cultural city, and is a must-see for people interested in history of Nepal.

The narrow alleyways and courtyards connecting the whole city is very fascinating to explore. Kathmandu although isolated from the modern world had very organized water system. Many water canals also known as “Dhunge dhara” is found in every corner of the city. You can find one courtyard for about every 50 homes, which used to be the place for social gatherings during the festivals.

There are different festivals throughout the calendar days in Kathmandu. Most popular ones are Dashain, Tihar, Machhindranath Jatra, etc.

The 7 UNESCO World Heritage Sites are:

Kathmandu has many ancient temples and palaces, which were once the residence of the Nepalese royal family. The Hanuman Dhoka palace is now a museum and is open to the public. You can enter the museum for a small fee. 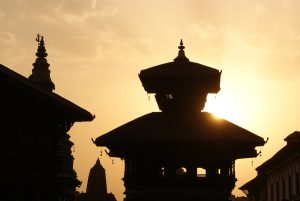 The Kasthamandap Temple, the Kumari Ghar, and the Maru temple are the major attraction on this site. Visiting these sites will be a delight to anyone who is interested in art and architecture.

You can also take part in many festivals and events throughout the year, including the Indra Jatra Festival in the area. During Indra Jatra, a tall man-made wooden chariot is pulled around the city of Kathmandu.

You can also do your own research and watch videos if you’re interested.

Kathmandu Durbar Square is definitely a must-see for someone visiting Nepal.

Second, on the list of UNESCO World Heritage Sites of Kathmandu is Patan Durbar Square located in the city of Patan. It is also among one the must-see historical attractions in Nepal. 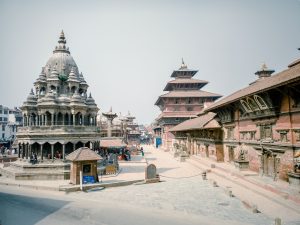 Patan Durbar Square was once the seat of the Malla dynasty, which ruled over the city of Patan for many centuries. You can see many palaces, including the Patan Palace, which was once the residence of the Malla kings. The palace is now a museum and is open to the public.

In addition to the palace, Patan Durbar Square has a number of other important temples and buildings, including Krishna Temple, and the Bhimsen Temple. These are the most popular attractions for visitors.

Bhaktapur Durbar Square is one of the most important UNESCO World Heritage sites in Nepal. It is more beautiful and culturally rich compared to the previous two Durbar squares.

Don’t forget to visit the museum and palaces as it has centuries-old art and sculptures very well preserved. Bhaktapur Durbar Square is also a place where a number of festivals and events takes place throughout the year, including the Bisket Jatra Festival.

Swayambhunath is an ancient Buddhist stupa located on a hill overlooking the city of Kathmandu, the capital of Nepal. This site is one of the most important religious and cultural attractions in Nepal and is a major destination for Buddhists and tourists alike. 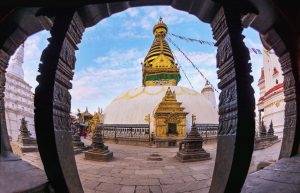 Swayambhunath is a stupa, which is a type of Buddhist monument that is used for meditation and prayer. The stupa is surrounded by a number of temples, shrines, and monasteries, which are important religious and cultural sites for Buddhists in Nepal.

One of the most notable features of Swayambhunath is the large, white dome of the stupa, which is adorned with a pair of eyes that are said to represent the all-seeing nature of the Buddha. The stupa is also surrounded by a number of prayer wheels, which are used by Buddhists as a way to accumulate merit and purify their minds.

In addition to its religious significance, Swayambhunath is also a popular tourist attraction in Nepal and is a popular destination for tourists and pilgrims who are interested in exploring the culture and history of the country.

Boudhanath is an ancient Buddhist stupa located in the city of Kathmandu, Nepal. This site is one of the largest stupas in Nepal and is a major religious and cultural attraction for Buddhists and tourists alike. 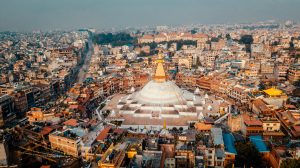 The stupa is adorned with a number of intricate carvings and paintings and is surrounded by a number of monasteries and temples.

Boudhanath is a popular destination for Buddhists who come to the stupa to pray and meditate and is also a popular tourist attraction in Nepal. 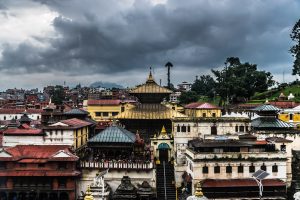 This temple is one of the most important religious sites in Nepal and is a major destination for Hindu pilgrims. The temple is dedicated to Lord Pashupatinath, who is considered to be the patron deity of Nepal.

The temple is adorned with a number of intricate carvings and paintings and is surrounded by a number of shrines and temples.

Changunarayan Temple is an ancient Hindu temple located on a hill overlooking the Kathmandu Valley in Nepal. This temple is one of the oldest and most important temples in Nepal, and is a major destination for Hindu pilgrims.

The temple is dedicated to Lord Vishnu, and is adorned with a number of intricate carvings and paintings.

Changunarayan Temple is a popular destination for Hindus who come to the temple to pray and make offerings, and is also a popular tourist attraction in Nepal.

In conclusion, Kathmandu and the surrounding region are full of cultural, historical, and natural attractions that have been recognized by UNESCO as World Heritage Sites. These sites are an important part of Nepal’s cultural and historical heritage and are a must-see for visitors to the country.